Feeling blue is a good thing in St. Louis

This city has always been an artistic incubator for music. Scott Joplin crafted Ragtime tunes here at the turn of the 20th century. Chuck Berry, the father of rock ’n’ roll, grew up and still lives here. Ike Turner discovered Tina and both went on to fame and fortune. Piano genius Johnny Johnson, who was Berry’s sideman, became an internationally acclaimed artist in his own right. Jazz innovator Miles Davis grew up here, nurtured by the Blues. The list is long and all of the names on it owe a debt to the Blues.

The Blues are still a living art form in St. Louis. From the genre’s earliest arrival, the city embraced this uniquely American form of music, encouraging it to thrive and find a home. There’s no better place for the National Blues Museum.

I came to the mother ship of the Blues thanks in part to two great quotes I ran across years ago. Muddy Waters, a Blues singer and guitarist who’s possibly best known for “I’m Your Hoochie Coochie Man” said, “The Blues had a baby, and they called it rock ’n’ roll.” Raised on a diet of classic rock, I was long captivated by Muddy’s deep thought. His observation made me want to know more about where my favorite music had been born. A trip to St. Louis provided that opportunity to look into rock’s genealogy.

The second quote that pushed me toward my museum visit? The Rolling Stones’ Keith Richards, who said “If you don’t know the Blues, there’s no point in picking up the guitar and playing rock ’n’ roll or any other form of popular music.” Inside the museum, I was delighted to see his words, which stuck with me for so many years, written on a large display on the wall as part of a tribute to the British invasion and its appreciation of the Blues.

Blues history is segmented into timelines inside the museum, following its origins in African culture, through the post-slavery northward migration, into the Depression and the Civil Rights movement, all the way to the modern era. Multimedia displays mix with hands-on activities and music artifacts and the sounds of the Blues waft throughout the displays.

The genre speaks to the experience of African Americans who came north to find work and create a better life in the nation’s urban centers. I learned that along the journey, the music that started in fields and farms took on the flavors of life in bigger cities. Seminal Blues songs “Frankie and Johnny” and “Stagger Lee” were written about titillating incidents that made news in St. Louis and the songs made the happenings internationally famous. W.C. Handy wrote the most recorded Blues song in history, “Saint Louis Blues,” while down and out on St. Louis’ riverfront. I thought about the city, the setting for so many Blues songs, just outside the doors of the National Blues Museum. It didn’t take long for Blues to merge with St. Louis’ Ragtime culture and with jazz floating upriver from New Orleans. The addition of piano and brass ultimately gave the guitar-based genre a little more urbane polish.

there’s no point in picking up the guitar and playing rock ’n’ roll or any other form of popular music if you don’t know the Blues.—Keith Richards 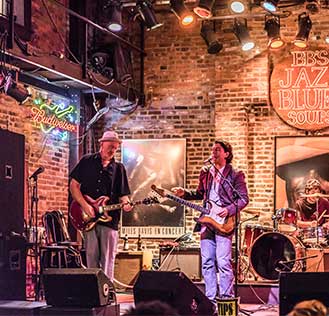 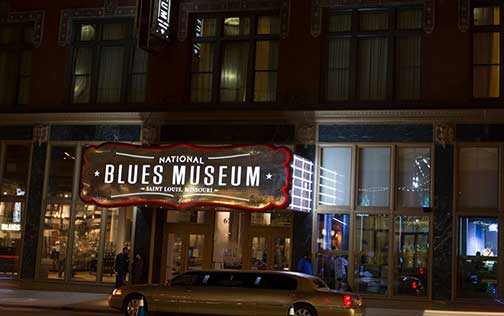 A wall of vintage suitcases appropriately frames exhibits that describe the movement of musicians via rail and road to the north. Their faces told me the stories of hard lives expressed in their music. A section on women in the Blues made me feel even more a part of the music’s story here with an early film of Bessie Smith singing “Saint Louis Blues” as a highlight. Her voice added a tone and feeling that was hard not to be captivated by.

Visitors have interactive opportunities in the 23,000-square-foot museum, an affiliate of the Smithsonian. Join a jug band (I played the washboard) and create your own Blues name (call me Bessie Berry Hamilton—a combo nod to my grandmother and our founding father, Alexander Hamilton, with a fruit added as an evocative middle name). I even created and recorded a Blues song in steps found throughout the exhibits as a great souvenir of my visit. I emailed my original tune to myself to play later.

The museum includes an intimate concert space called the Lumière Place Legends Room. It was fun to see middle school-aged groups experiencing the Blues for the first time. I could see their worlds were being opened to new sounds as they listened to the tunes, tapping their toes and moving to the rhythm. I wondered if Blues would replace today’s tunes on some of their personal playlists from now on.

The National Blues Museum in St. Louis is a complete sensory experience. I had expected to hear the music of America’s roots and see artifacts from its past, but why was I also being carried away by the scent of smoky pulled pork?

I had expected to hear the music of America’s roots and see artifacts from its past, but why was I also being carried away by the scent of smoky pulled pork?

The inspired placement of Sugarfire Smokehouse, one of St. Louis’ acclaimed barbecue restaurants housed in the same building as the new museum, was the delicious answer. I knew immediately that a meal there would be the perfect ending on this journey through mid-America’s Blues history.

As I left the museum and headed toward my waiting dinner at Sugarfire, I knew that soon my belly would feel as satisfied as my curiosity, thanks to the new understanding I found of America’s music and the roots of my rock ’n’ roll soul.

After a visit to the new museum, you’ll be ready to hear the Blues in its rightful place at one of St. Louis’ many clubs. Start just south of Busch Stadium along a stretch of Broadway where BB’s Jazz, Blues and Soups, the Beale on Broadway and the Broadway Oyster Bar provide a home for today’s Blues artists. Go to BB’s late nights to see jam sessions of Blues masters who get together after their own club dates. A bit farther south, the historic Soulard neighborhood is another refuge for the Blues with cozy clubs on many corners. For more Chuck Berry memorabilia and a look at his famous guitar, head to Blueberry Hill, a restaurant and club in The Loop neighborhood. Add some jazz heritage to your itinerary with a visit to the listening room, Jazz at the Bistro, in the Grand Center Arts and Entertainment District.

Explore more of the musical side of St. Louis.
You May Also Like
GET THE FREE VISITORS GUIDE
Find inspiration for your next St. Louis visit!
× SEE & DO DINING & NIGHTLIFE SHOP STAY 25 THINGS TO DO NEIGHBORHOODS ITINERARIES DAY TRIPS