Here’s the rub (on ribs, tips, burnt-ends and even snoots) that explains why St. Louis BBQ is tops

St. Louis is all fired up about barbecue. The city’s smokin’ hot barbecue scene flamed up with the opening of Pappy’s Smokehouse in 2008 and spread like wildfire with new places opening faster than Bud bottles on a sizzling summer day.

All sorts of styles and places flourish. All cuts and types of meats show up. On the other hand, a few distinguishing items set St. Louis apart. Locals like their barbecue scattered with variations on a theme of a sweet and savory, tomato-based sauce. The heat quotient depends on the added seasoning. In addition, St. Louis claims snoots, pork steaks and rib tips as hometown specialties.

Smoki O’s, in the near north side of downtown, serves snoots beyond compare. The tiny restaurant with counter service and a few seats indoors and out, boils and then smokes snoots until they are crispy, crunchy nuggets permeated with a porky, crackling goodness.

A butcher from Schnucks, a local grocery chain, cut the first pork steak in the 1940s and the steak has thrived happily ever after. Usually as big as the sole of a man’s shoe, pork steaks are grilled or smoked and often served smothered in sauce as a staple in most restaurants.

Although the city has lent its name to St. Louis-style ribs—defined as spareribs separated from the curved baby back ribs and the rib tips—it’s the rib tips, often discarded elsewhere, that homebodies call a delicacy. 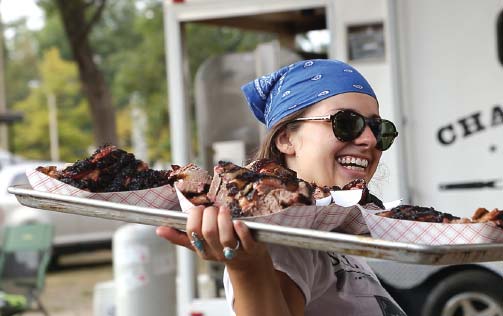 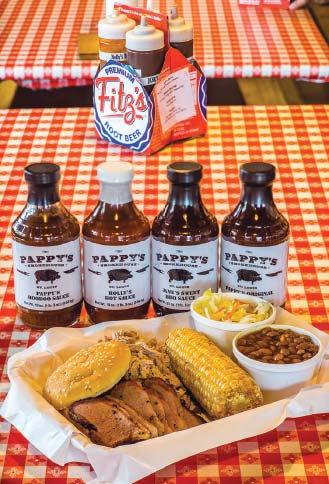 Ribs are the heart of St. Louis barbecue. Every barbecue place serves ribs, all cuts included, and many earned a reputation for secondary specialties that give their ribs competition.

The brown sugar dry rub, which caramelizes in the heat of the slow-smoked ribs at Pappy’s Smokehouse, near Grand Center in midtown, makes the ribs hard to beat, but then, so are Pappy’s pulled pork, beef brisket and burnt ends. This super-hot barbecue spot opened in 2008 and remains an all-time must for barbecue fans.

Consistently ranked among the best BBQ restaurants in the St. Louis metro area, Sugarfire Smoke House has six locations. World-trained chefs and pit masters are always coming up with creative sides to pair with their exceptional BBQ. Other tasty selections include their famous homemade pies, cookies and shakes.

And in The Loop neighborhood, at the upscale/down-home Salt + Smoke, bourbon cocktails, hush puppies with maple butter and burnt-end ravioli share equal popularity with the ribs, brisket and pulled pork.

Each September, top BBQ chefs from around the country pack up their grills and smokers and head to St. Louis for the annual Q in the Lou BBQ Festival.  Featuring many of America’s legendary pitmasters, it’s a celebration of great barbecue, with cooking tutorials, a BBQ innovations expo, great live music, and of course, the best barbecue in America.

As to where to go, grill locals and you’ll get a hot debate. No ribbing. It’s a bone of contention as to favorites. Just know that most St. Louis neighborhoods sport terrific barbecue choices, tempting fans to go hog wild and pig out at every opportunity.

Put on your BBQ bib and get messy in St. Louis.
You May Also Like
GET THE FREE VISITORS GUIDE
Find inspiration for your next St. Louis visit!